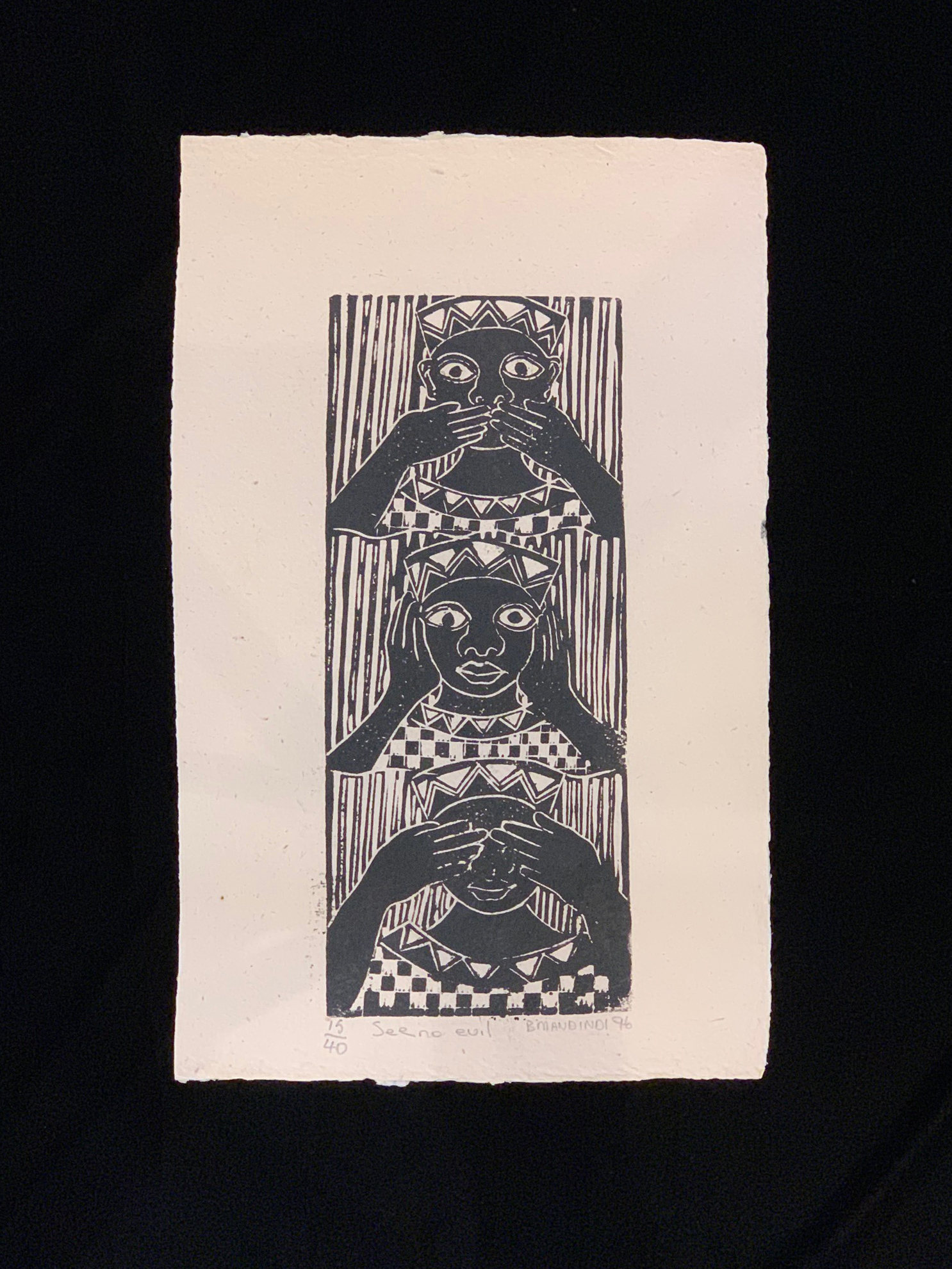 Linocut is a printmaking technique, a variant of woodcut in which a sheet of linoleum (sometimes mounted on a wooden block) is used for a relief surface. A design is cut into the linoleum surface with a sharp knife, V-shaped chisel or gouge, with the raised (uncarved) areas representing a reversal (mirror image) of the parts to show printed. The linoleum sheet is inked with a roller (called a brayer), and then impressed onto paper or fabric.

Buysile "Billy" Mandindi (19672005) was a black South African activist-artist who participated in a landmark protest in Cape Town in 1989, the so-called Purple Rain Protest.

Mandindi's art reflected the struggle for political liberation. In 1988 Mandindi participated in the "Palette of Oppression" group exhibition with Rodger Meintjies and Fuad Adams. His works can be found all over the world.

Born in Cape Town on 24 February 1967, Billy Mandindi was educated in King Williams Town, in the Ciskei region of the Eastern Province. Mandindi mostly taught himself art, although he did take classes at the Community Arts Project (19851986), and at the Michaelis School of Fine Art of the University of Cape Town for one year (1987-1988). He also regularly attended the Visual Arts Group workshops between 1988 and 1989.
Mandindi was associated with Hardground Printmakers for 4 years, which produced his prints and portfolios of linocut. During the 1980s and 1990s, Mandindi participated in group and solo exhibitions in Cape Town, Durban, Johannesburg, and Stellenbosch. Mandindi's work featured in a Museum of Modern Art Exhibition in London (1990) and in the South African National Gallery in Cape Town (1994). The Belgian curators of the 1995 Africus Biennale in Johannesburg invited him to show his work. In 1996 Mandindi was invited to Denmark, Copenhagen as part of the Container 96-Art Across the Oceans exhibition. He collaborated with Gavin Younge] on "Umkrweli/House," which referred to issues of housing and access to land. Mandindi next participated in the Fault Lines exhibition at the Castle of Good Hope in Cape Town by invitation. The exhibition commemorated the uprising of black students in 1976 against the implementation of Afrikaans as a medium of instruction for certain subjects in black schools.