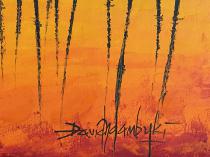 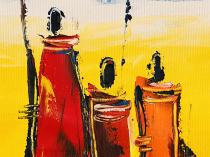 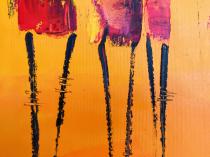 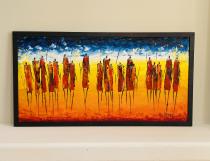 The composition consists of several long, attenuated figures repeated horizontally across the surface and rendered in rich colors and lively brushwork. These slender abstracted forms, are warriors of the Maasai tribe, who are found throughout Kenya and Tanzania.
The painting is of authentic tribal colors and forms and has an absence of Western artistic and cultural pretension.
In the repetition of abstract forms and rich colors (meant to evoke the look and feel of Maasai standing in the distance and set against a vast African plain), Africa has become inscribed in the work as idea  as image  and with each iteration, the distinctive lines and splashes of color become the mark of the icon.

About the artist: Ndambuki was born in 1960 in the Machakos District of Kenya, where he studied and graduated from the Creative Arts Centre in Nairobi where he received a diploma in fine arts. He continued his art education and received a diploma in graphic design at Kenya Polytechnic.
Ndambuki's paintings typically depict simple scenes from everyday life, and he utilizes bright contrasting colors which evoke a sunset / sunrise affect. Ndambuki was interested in art from an early age. Ndambukis work is strongly influenced by the Maasai people. The painting offered here is a typical example.
Ndambukis work has been exhibited in the United States, Germany, and Japan, and one of his paintings is on permanent display at the Museum of Contemporary Art in New York. His work is included in Kenyan exhibitions at the French Cultural Centre and British Council.