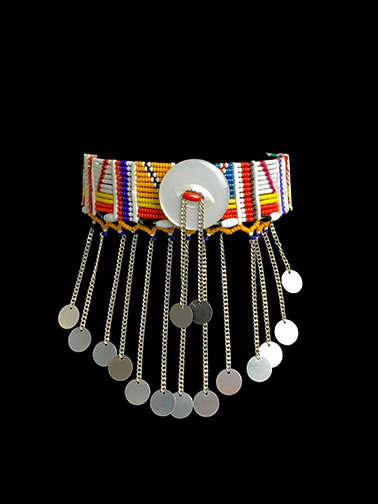 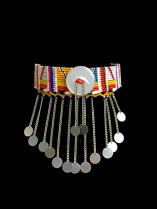 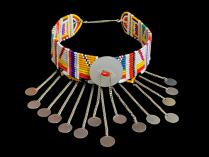 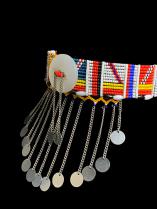 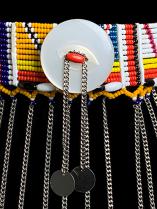 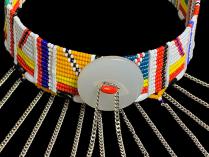 $110.00
Throughout the world, ethnic groups are characterized and identified by dress and ornamentation. The Maasai are, perhaps, one of the most widely recognized people in terms of fashion and decoration, sporting bright colors, intricate patterns, and jewelry that dangles, jingles, and catches the eye.
The Maasai conjure up popular images of young brides weighted with beaded ornamentation, numerous, collar necklaces that rhythmically move when they dance, headdresses that drape and accent the facial features, and brightly colored bangles wrapped tightly around forearms.
Because the Maasai are traditionally a pastoral people, much of the color symbolism relates to cattle.
Red, for example, signifies danger, ferocity, bravery, strength, and especially unity, because it is the color of the blood of the cow that is slaughtered when the community comes together in celebration. Blue is important because it represents the sky which provides water for the cows. Green is important because it represents the land which grows food for the cattle to eat. Green also represents the health of the Maasai community because there is a local plant called olari which grows tall and plentiful, as the Maasai hope they will too. The gourds that hold the milk that are offered to visitors are colored orange, and so this is the color of hospitality. Yellow also suggests hospitality because it is the color of the animal skins on guest beds. Because white is the color of milk, which comes from a cow, considered by the Maasai as a pure and holy animal, white represents purity. White also represents health, because it is milk that nourishes the community. Black represents the color of the people but more importantly the hardships we all go through in life. It suggests that difficult times occur with everyone because those difficulties are part of the same, natural sequence of life.