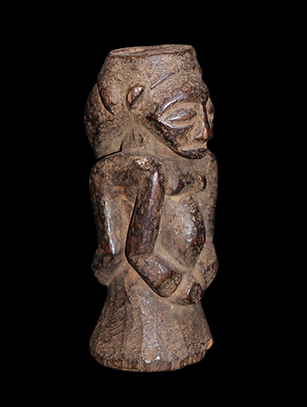 What follows is an insert from the book, "Art of Africa" by Jacques Kerchache, Jean- Louis Padrat, Lucien Stephan & Francoise Stoullig-Marifn

"In Southeastern Democratic Republic of Congo, the Hemba people inhabit vast plains surrounded by high hills and bordered by streams, rocks, and marshes. Their social organization is founded on a system of clans that bring together several families sharing a common ancestor. Each clan knows the histories of its migrations, conquests, and alliances and obeys a certain number of regulations, duties, and taboos, the most important of which are dietary. A clan may constitute an entire village, independant of the others. Farmers and hunters, the Hemba practice ancestor worship, not only to keep the memory of their great chiefs alive, but also to justify the present authority over clan members and are in charge of several ancestor figures they keep in their own hut or in a smaller, funerary hut. As celebrant of the ancestral cult, the clan's chief, surrounded by his people, communicates with the ancestor, recalling his great deeds and summoning his good will. He then offers a chicken, sometimes striking it against the ground, sometimes against the statue - thus adding to the statues thick patina. The celebration ends with a meal of manioc flour & chicken." "The Hemba attibute great importance to the Kabeja, a janus-shaped statuette, which has a single body but a double face, male and female on a single neck. At the top of the kabeja is a small receptacle to hold magic ingredients. The line of the abdomen with its protruding navel recalls the the Singiti, (ancestor statue), as do the slightly bent arms. Each clan posesses a single Kabeja, which is dangerous to handle, and which receives sacrifices intended for the spirits, a magico-religous practice that is of essence to the family. " - "Art of Africa" 1993 (Pg. 572-573)