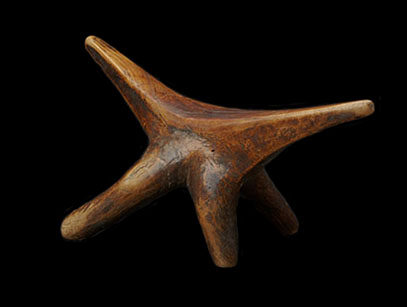 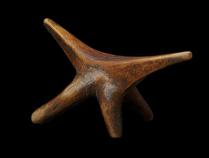 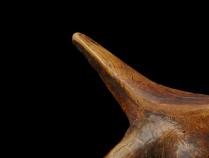 Description:
Headrests were used by men to protect their hairstyles while they slept. Many east African pastoralists regard coiffure primarily as an indicator of status. A young man is entitled to begin wearing the distinctive coiffure that marks him as an adult only after he is initiated. The use of headrests is often associated with this advancement and the headrests themselves become status symbols. The Dinka multi-purpose headrests/stools also provide a convenient place to sit as it is not considered proper for elderly men to sit directly on the ground. Headrests were made to resemble the forms of various animals, and birds. The symbolic importance of such objects is highlighted by the Shilluk belief that this headrest form was invented by Nyakang, their most important ancestor, culture hero and the founder of the Shilluk dynasty. The Anuak held that if the king-elect was able to balance on a three-legged stool during his investiture ceremony he was acknowledged as the rightful heir.