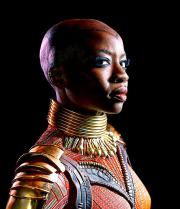 $55.00
The number of metal rings worn by a married Ndebele woman indicated the wealth & status of the wearer and the husbands wealth.
The Ndebele believe that wearing the Dzilla was ordained by their ancestors. These days, the Dzilla are being replaced with plastic rings rather than risk distending their neck.
Worn in odd numbers, three to seventeen, and in addition to having been worn around the neck, were also worn on the forearm and lower leg.
The rings are bent perfectly round before fitting onto the owner.
An important element of the Ndebele womans regalia were the dzilla. Metal neck, ankle, and arm rings were worn by married women to imitate the rolls of fat on the woman. The Ndebele culture celebrated large women.
They were made by male craftsman and custom fit for each individual. By the 1980s these weighty rings were replaced by coil plastic beading which could be readily fit and detached like an ordinary necklace. There are hardly any Ndebele men still around who could manufacture and fit the original rings.
The rings symbolized a womans faithfulness to her husband and were believed to have strong ritual powers.
Neck rings are not unique to Africa for use as ritual attire. Elsewhere in the world, the women among the Padaung of Burma wore similar stacked metal rings around their necks.
Note, we have smaller rings which would have been worn on the ankle and arm.

NOTE: Price is per ring