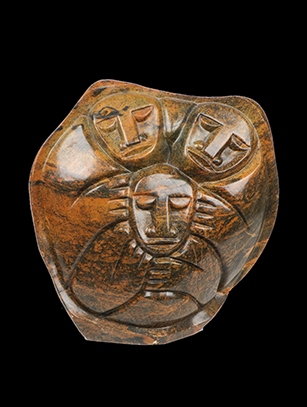 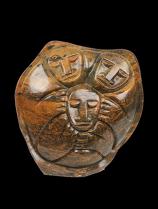 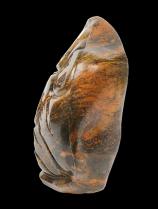 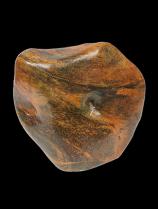 Description:
"House of Stone" is the literal translation for Zimbabwe, home to some of the world's most praised stone sculptors, the Shona. The inspiration for these majestic stone sculptures often comes from tribal myth and legend, & spiritual communion with the stone itself. This extraordinary art form has emerged within the last 50 years. Shona sculpture has earned such an outstanding reputation that some of the artists are now recognized as the world's best. They also represent a modern link with an ancient past. Creative & artistic genius has found expression in these stone carvings from Zimbabwe. Each carver is guided by the resources of his own imagination, using only basic hand tools & no formal art training. The stone sculptures are carved from a variety of local rocks such as serpentine, Springstone, African jade and a host of other stones.

Nevison Solomon was born November 22, 1863 in Gokwe District, Zimbabwe the fourth of ten children, six boys and four girls. The Solomon family were farmers with their main food being (from Maise) and a number of different types of vegetables. As a child he would dig clay and make small animals to amuse himself. In 1970, Nevison Solomon started his primary education at Nembudziya School. He began the secondary levels at Dukaupfu School in 1977. However, for financial reasons, he was unable to complete his formal education. At 17, he sought work at one of the surrounding farms, Tengwe in Karci. He was employed as a general worker and eventually promoted to the position of office clerk. He worked for two years. In 1982, Nevison lived in Dzivarasekwa, Harare with his uncle, Richard Mahoyo, an artist doing stone carvings. Nevison found sculpting interesting and began helping his uncle. When Richard Mahoyo died, Nevison was forced by circumstances to continue carving on his own. But with so little training, Nevison found the work extremely difficult. In 1988, Richard Mteki invited Nevison to his home to discuss the art of carving. Soon after, Nevison began working with Mr. Mteki. Nevison worked with Richard Mteki for one year before venturing out on his own once again. Nevison Solomon began with seven tons of stone from Tengenge in 1990. He carved a number of pieces and sold them in countries such as France, Germany, Italy, America, Brussels, Britain and Switzerland. His first exhibition was in 1992 at the Standard Chartered Gallery, and in 1995 he had a one man exhibit at the same gallery. Today, Nevison Solomon is married with two daughters.