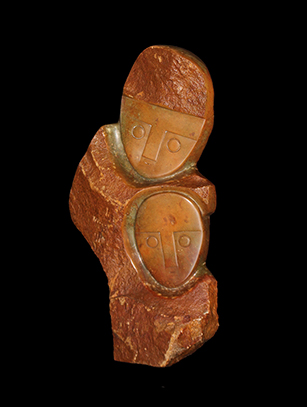 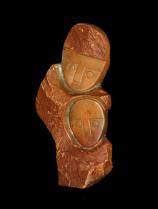 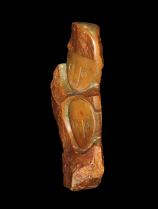 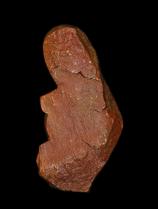 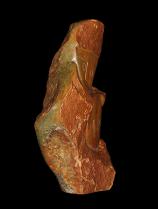 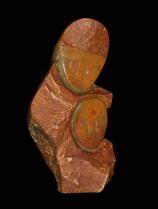 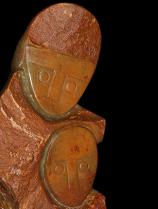 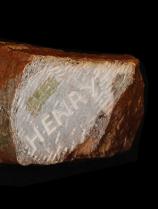 "Together As One" by Henry Munyaradzi - Sold

Africa and Beyond is proud to present a beautiful sculpture by world renowned artist, the late Henry Munyaradzi, entitled "Together As One," carved out of the rare Zimbabwean granite, Opal Serpentine, known for its beautiful depth of color.

Henry is one of the most famous, and certainly the most praised sculptor ever from Zimbabwe, and we have an extensive biography on him going back as far as 1968 to his untimely death in 1998.

Since then, the value of his pieces has continued to climb, and will continue to do so. It is never too late to invest in an artist of his stature. This is a very rare piece by a highly sought after artist. This piece is signed by the artist.

BIOGRAPHY OF ARTIST:
Henry Munyaradzi is known as a "Master Sculptor" of Africa and his native country, Zimbabwe, where he is considered the "Father of Shona Sculpture." His works are highly collectible and sought after.

Known simply as "Henry," Henry Munyaradzi is the poet laureate of Zimbabwe Sculpture. He was born in Guruve, the North of Zimbabwe, in 1931 and began sculpting after meeting Tom Blomefield at Tengenenge is 1967. The essence of Henry's work came from the shape of the stone itself, from which Henry drew inspiration and imagination. His work is "characterized by intersecting, flat rectangular shapes, circular forms, cones, spheres, and cylinders, all harmoniously related" (Stone Sculpture from Zimbabwe, Hayden Galleries). Henry achieved remarkable success internationally with one man and group exhibitions all over the world. Entirely self-taught his skill has amazed artists and art lovers the world over. Henry died in 1998 at the age of 67. His death was a great loss to the Zimbabwean Shona Sculpture community.


Henry Munyaradzi's background, like his life and work, is as deceptively simple as it is remarkable. His father, a spirit medium, left the family when Henry was very young and from this point on, Henry's childhood and upbringing was typical of rural Zimbabwe at the time - herding cattle and hunting game with dogs, spears and bows and arrows. He did not go to school during his life and was still learning the English language. He eventually worked in various ways with the natural land and industry around him - first as a village blacksmith and later as a carpenter and tobacco grader.


However, this similarity with the lives of his peers ended in 1967 when, out of work, he stumbled across the Tengenege Sculptors' Community set up by Tom Blomefield. Ignoring the large powerful work by Bernard Matemera and Josiah Manzi, he began to sculpt, preferring to work alone and from the beginning with individual strength and powerfully original imagery. As a result he quickly established himself as the leading artist of the community, but left to work alone in 1975.

His work began to be included in exhibitions early on in his career - his first exhibition at the National Gallery of Zimbabwe, for example, was in 1968. Since that time he has been exhibited both in group and individual shows worldwide and the striking linear images in his sculpture make it some of the most internationally popular of the Zimbabwean artists. Following a very successful one-man exhibition in London in 1984, he was able to purchase his own farm, gaining inspiration from the rural surroundings.


The strength of his work lies in the purity of form - technique and imagery are honed down to pinpoint the essence of his subject in the simplest of terms. The confident lines and clear-cut geometric incisions have often been compared to Klee (an artist of whom Munyaradzi would never have heard) - but these symbols and his love for a finished product of great beauty and calm have been present in his work from the very beginning. His subject matter is taken from the natural world around him and only the intimate knowledge of this world can produce such minimal, but precise, expression. Being entirely self-taught his work blends the simplicity of the primitive with stylised sophistication. He greatly respected the stone he used and was often inspired by the original shape. It is an intense relationship with the material as he worked spontaneously, neither drawing nor measuring. Despite its apparent simplicity the work cannot be reproduced, and he constantly worked to express in new ways his themes of contemplation and spirit in his relationship the natural world and with his personal Apostolic faith. Contemplation of stories in the Bible provided Munyaradzi with the powerful imagery of supplication, friendship, family ties and the security of paternal protection.


Henry Munyaradzi has participated in almost all the major group exhibitions as well as eight one-man shows in London, Los Angeles, Berlin, Heidelberg and Harare. His work is found in the Permanent Collections of the National Gallery of Zimbabwe, Chapungu Sculpture Park and in Museums and private collections throughout the world.