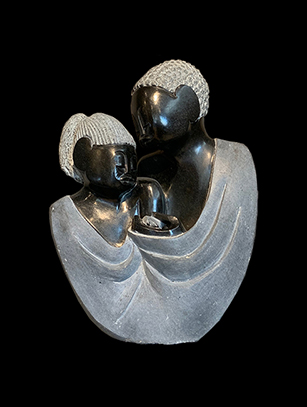 "Facing Life Together" by Jonothan Mhondurohuma

$1,950.00 InStock
The reason black granite is known as Springstone amongst the Shona artists of Zimbabwe, is because it is such a hard rock, that when your chisel hits the stone, it just springs off!
Sculpted from one piece, we love the two tone effect he creates by leaving some of the stone unpolished.
Jonothan Mhondurohuma was born on Christmas day in 1974 in Mvurwi. In 1989, Jonothan's good friend Square Chikwanda asked him if he would come to work with him. He studied there for six months under Chikwanda. He found that the rural life was not for him, so he decided to move back to Harare. It was there that he studied with the late Joseph Ndandarika.
Ndandarika had a great influence on the work of Mhondurohuma, as can be seen in the fluidity of his lines and his meticulous composition. His works contain aspects of traditional Zimbabwean sculptures which he uses and adds his very own distinctive style.
His work includes aspects of classical Zimbabwean sculpture as well as innovative subjects. Jonathan's sculptures have many familial ties, and relate very much to his three children, and his wife Faith. He is one of the major talents of the young Shona sculptors.